Businesses are under increasing pressure today, as industry disruptors and digital transformation ratchet up the pressure to innovate and move faster than before. One challenge is the ability to quickly roll out and scale up a robust, on-premises private cloud deployment, without having to acquire dedicated high-availability hardware.

Fortunately, hyper-convergence infrastructure (HCI) looks set to do the same for its ability to quickly and easily deploy on-premises systems today. While implementations vary depending on vendors, HCI essentially delineates storage and compute into pools of private cloud resources that can be allocated fluidly, with workloads that can be migrated between physical machines without repercussions.

The benefits are many. One is the ability to quickly expand IT infrastructure by adding additional appliances as opposed to trying to take a stab at future CPU, storage or RAM requirements. And instead of managing dozens or even scores of disparate systems, administrators gain cloud-like control over the entire cluster.

Moreover, the inherent high-availability also means that the failure of any single node will not impact system uptime, while the merging of storage and compute into a single hardware unit also reduces the cost of electricity and space. It is no wonder that SMBs and enterprises alike are looking to HCI to meet their IT needs, driving HCI revenues to a forecasted US$7.15 billion in 2021, according to analyst firm IDC. 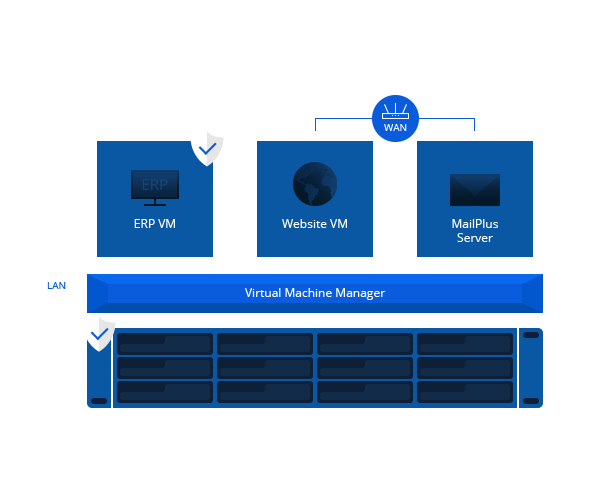 It was with the industry trend towards HCI in mind that Synology last week released Virtual Machine Manager (VMM) Pro, a commercial package that allows organizations and professional users to build on top of the basic capabilities found in the free VMM package that allows users to run virtual machines on supported Synology NAS.

The basic VMM package was first released in November last year and supports Windows (Including Windows Server) and Linux virtual machine, as well as Virtual DSMs. The latter is a relatively recent feature that allows administrators to create virtual instances of the DiskStation Manager (DSM) operating platform for use by different departments or teams – tapping into the appropriate DSM packages that they see fit without impacting other virtual DSMs.

On its part, VMM Pro takes it further by letting businesses integrate and manage multiple Synology NAS into a virtualized cluster of up to 7 nodes in an HCI-like manner – but without having to purchase HCI hardware. Within each cluster, administrators to flexibly distribute hardware resources and manage virtual machines between physical hosts to eliminate downtime.

While I had been aware of virtualization capabilities in Synology’s DiskStation Manager (DSM) operating platform for some time, it wasn’t an area that I thought much about until the launch of VMM Pro was highlighted to me. I’ll even be honest and say I was skeptical about its utility, even. But as I investigated the possibilities though, I was pleasantly surprised by the practical possibilities that VMM and VMM Pro offer to administrators. 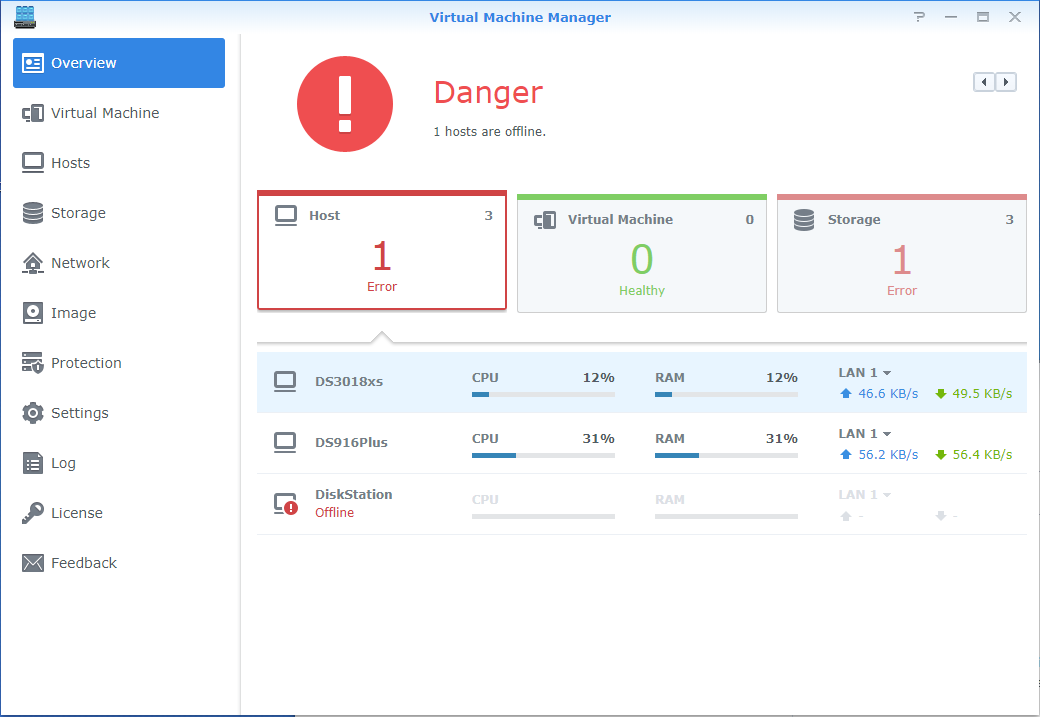 Based on KVM, the Synology VMM package creates a centralized interface from which to create and manage virtual machines (VMs). Non-essential details such as name of VM file images are abstracted away, allowing an administrator to easily focus on the big picture. For instance, the VMM dashboard provides an overview showing the hosts within a cluster, available storage volumes, and the number of virtual machines.

VMM offers a variety of ways to create a new VM, which can range from uploading an .OVA file from your PC or stored on the DiskStation or created directly from the wizard. True to the premise of HCI, you can launch VMM on any of the participating NAS to target any of the storage volumes within the cluster to create a new VM. Elsewhere, you can define typical parameters such as the amount of RAM, virtual CPUs, the size of the virtual disk, as well as the default network. 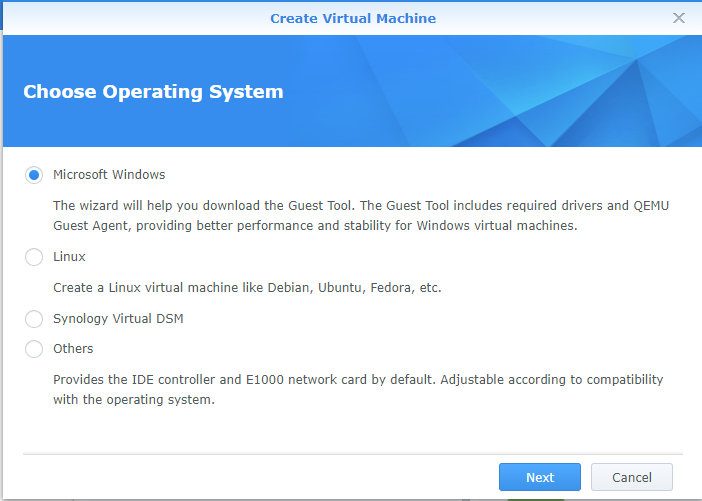 When creating a new VM, you will note the option of creating one based on the “Synology Virtual DSM”. As mentioned earlier, each Virtual DSM serves as a full-fledged DSM, but with access only to the virtual environment. The advantage is that administrators to encapsulate the entire DSM environment into a single file that can be backed up and migrated – and tap into the power of Synology’s vibrant ecosystem of packages that can be installed at a click of the mouse. Note that each instance of Virtual DSM requires at least 1GB of RAM to run.

The most powerful capabilities with Synology’s VMM is reserved for VMM Pro, which is a paid upgrade to unlock the “pro” features such as live migration, high-availability, storage migration and remote replication. Importantly, VMM Pro will retain up to 255 different snapshots of VMs over the basic VMM’s 32 snapshots for greater assurance.

In my opinion, the two most appealing features for businesses are live migration and high availability.

This allows for a running VM to be migrated to another host while still running and is an invaluable feature to keep services running when maintaining or upgrading the cluster. A couple of examples that come to mind is when rebooting a Synology NAS after upgrading its operating system, or swapping in a new, beefier NAS.

To ensure heightened reliability and reduce service interruptions stemming from hardware or software malfunctions, organizations can enable the high-availability (HA) capability for crucial services. This requires a minimum of 3 hosts within the cluster and works by automatically shifting the stalled workload on a configured passive server.

I have hardly touched on other capabilities in VMM, including the virtual switch and data protection capabilities for VMs through remote replication and snapshots. The possibilities should be amply evident, and I will go through some of the more advanced use cases if there is interest.

Running virtualization on your NAS is not without its limitations of course. Compared to a dedicated server, even the generally powerful NAS lineup from Synology is comparatively limited in terms of available processing capabilities compared to what the latest Intel Xeon processor can dish out. This means VMM will likely appeal to a niche audience with either storage-heavy requirements or are already using a supported Synology NAS.

In addition, you will need to upgrade the RAM from the default of 2GB to 8GB for VMM to truly shine. Fortunately, RAM is cheap these days at just over SG$100 for an 8GB stick of DDR3 at the point of writing. And while I don’t believe the impact of running virtualization is significant for typical use cases, I would caution that its impact on storage performance isn’t established at this stage.

Having said that, I can certainly see the appeal of VMM. For a start, organizations or retail businesses with remote branches and servers running light to moderate workloads can conceivably virtualize them onto a Synology NAS or two. Not only can this precious physical space and reduce the amount of hardware to maintain, but the advanced capabilities in VMM Pro can significantly increase reliability without thousands of dollars in specialized HA equipment.

As noted earlier, the VMM Pro license is available in 3-node or 7-node offerings, at a highly compelling annual subscription price of US$149 and US$299 respectively. That’s US$149 for up to 3 NAS, or US$299 for up to 7 NAS. While hardly an apples-to-apples comparison, there is no denying that VMM Pro is priced at a very small fraction (Think less than 10%) of what a competing solution such as VMware vSphere costs.

If this sounds like your cup of tea, the basic VMM package is free for download and use. For those who want to give VMM Pro a spin, a free 30-day trial can be activated once for supported NAS models with no credit card information required (A 90-day test license is apparently also available upon request). And for those who need it, Virtual DSM licenses are separately licensed with a 3-year software upgrade period.