Synology wants to be the all-in-one server for your business with DSM 6.1

It has been a while since we looked at Synology’s DiskStation Manager (DSM) after we wrote about its beefed up backup capabilities with the major DSM 6.0 release. And it looks like the company has been hard at work on improving the core DSM experience, which culminated with the official release of DSM 6.1 this week.

While hardly as big an update that DSM 6.0 was, the latest revision is nothing to be scoffed at. The new version will offer a long host of refinements to its core data storage and backup capabilities, as well as more granular capabilities and packages that promises that makes it more it more appealing to businesses than ever. Let’s take a closer look at some of them.

Various improvements to core components of the DSM platform that your Synology NAS should run with less service interruptions than before, and deliver greater protection for your data against hardware failures – both of which are crucial  to businesses.

For one, improvements to the patching and updating engine means that DSM 6.1 will install essential fixes without a system reboot. This is especially useful for patches that should not be delayed, such as those required for system stability or to close security holes. Of course, updates that do require a system restart can also be postponed to the next scheduled maintenance. Just try not to put off security-related updates. 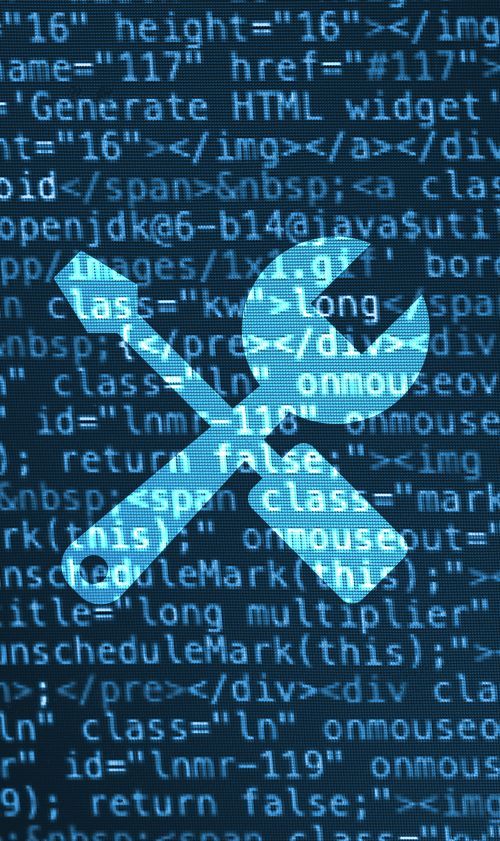 Elsewhere, the package center now has the smarts to automatically repair software packages that break during an update. This is more of a time-saver, though it may encourage more users to enable auto updating of packages – and is probably a good thing.

Support for the Btrfs (“b-tree F S”) file system gets a boost with the ability to automatically detect and repair corrupted files using mirrored metadata. This will work with all supported RAID volumes formatted to Btrfs, including traditional options as RAID 1, RAID 5, RAID 6 and RAID 10, and of course SHR (Synology Hybrid RAID) volumes.

We think this is a fantastic upgrade that promises to eliminate potential file corruption. It should be noted however, that users with existing ext4 (or other) volumes will need to format their volumes to Btrfs first, since the file system won’t magically upgrade itself. The good news for novice users: Btrfs is the default file system instead of ext4 when setting up a new system or performing a factory reset.

As your business grow and you decide it needs greater protection, volumes set to single disk redundancy with SHR can now be migrated to two disks redundancy. This is a huge plus, considering how it was previously necessary to park the data elsewhere and rebuild the volume from scratch.

Finally, File Station now offers support for SMB 4.4 which comes with sparse file support (It’s technically a package, but who doesn’t use File Station?). This translates into more efficient usage of space as the system will only allocate storage space to a file for nonzero data, which can dramatically reduce the usage space required for certain types of files. Indeed, users who store a lots of virtual server images should find the space savings particularly noticeable.

Improvements to its core functionality aside, DSM 6.1 also comes with quite a few features that should be useful for collaboration and productivity. If you recall, DSM 6.0 addressed the problem of creeping feature bloat in each successive version of DSM with the use of modules and putting non-core features into optional packages.

This offers a few advantages, one of which would be a reduction of its vulnerability footprint. This also allowed the software engineering team to more easily create and update new packages without any risk to the stability of the DSM platform. The company has apparently taken full advantage of this, and announced a total of 12 new applications.

With an eye on collaboration, this includes a brand-new Word-like collaboration application, a Synology-based shared calendar, and a chat platform to help small businesses save money on cloud services. While providers typically charge only a few dollars per user per month for cloud services, this can stack up quickly for a mid-sized company of a few hundred employees.

Even for smaller businesses of a few dozen users, this can be hundreds of dollars per month in recurring fees. So why not deploy it from a shared storage device designed specifically for reliability and preservation of data instead? If this sounds like your cup of tea, you can learn more about it here 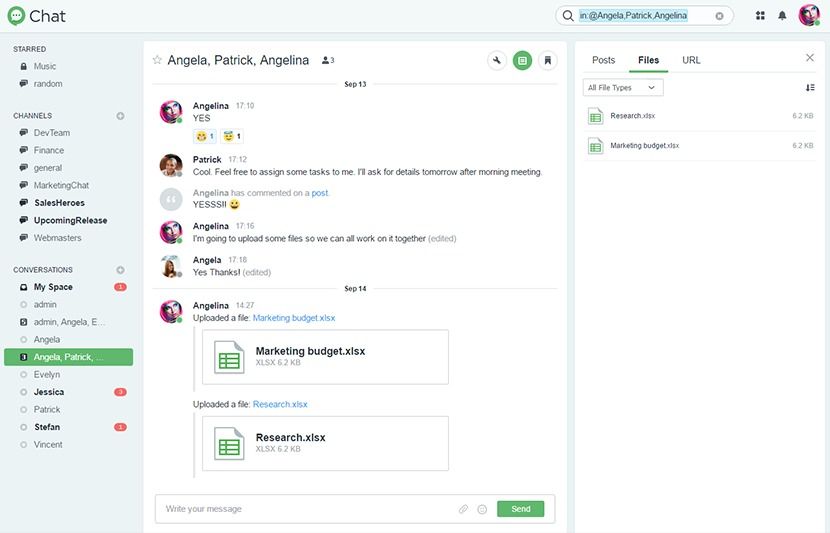 The chat platform is particularly interesting as it offers a complete self-owned chat platform for cross-departmental communications where chat messages can be retained and archived. Just like your typical public chat service, Synology Chat supports the exchange of messages, files and links. But because the messaging service runs entirely on the Synology NAS, corporate information remains safely stored on the company premises but without the cost or complexity of enterprise chat solutions.

Inside the SMB office

For small and mid-sized businesses, three other new features that is slated to arrive with DSM 6.1 is also worth watching for: Active Directory Server, Active Backup, and Synology Universal Search. Together with the collaboration capabilities outlined in the previous section, the combination of these tools effectively mean that your Synology NAS can serve as the all-in-one server for your organization.

The package is powered by Samba – so no proprietary implementation to worry about here – and will support commonly used Active Directory features such as user accounts, group memberships, as well as domain-joining with Kerberos-based authentication and group policies. To our understanding, not all NAS models will be capable of running it though – you can see the current list of them here. 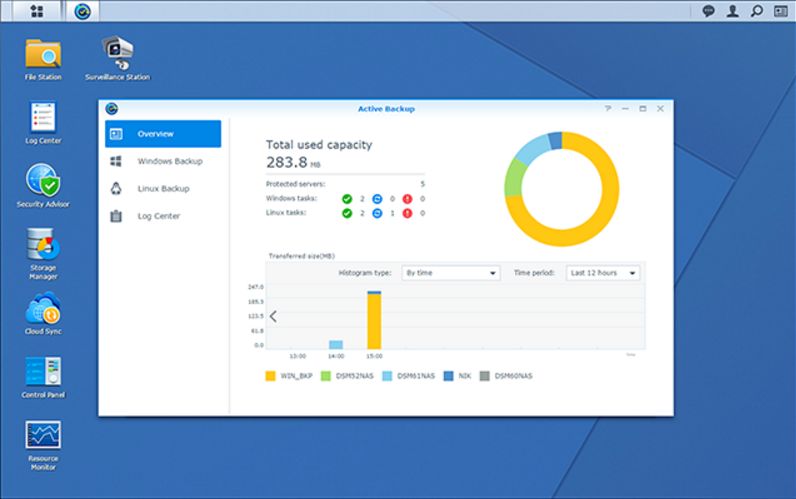 The Active Backup package offers a new central management interface to help create and manage backup tasks on the DSM. Instead of having to use multiple software interfaces, Active Backup works as an agentless backup tool that can backup data from both Windows and Linux servers. Backup your Windows server with VSS (Volume Shadow Copy Service) by setting up a backup user account, while the latter works through rsync.

The obvious advantage is no more grappling with backup software from different third-party vendors. Device to NAS backup, or snapshot backup of storage volumes, everything can now be managed from the DSM user Interface. And by leveraging the inherent capabilities of Btrfs, Active Backup jobs can be set up as a mirror, multi-versioned, or incremental backup. The last two leverages DSM 6.1’s improved capabilities to reduce the storage costs by tapping into its incremental data backup and cross-version deduplication engines.

In addition, an advanced histogram tool in Active Backup monitors backup traffic from both time and task perspective, and gives administrators an “at a glance” ability to identify abnormalities or errors. 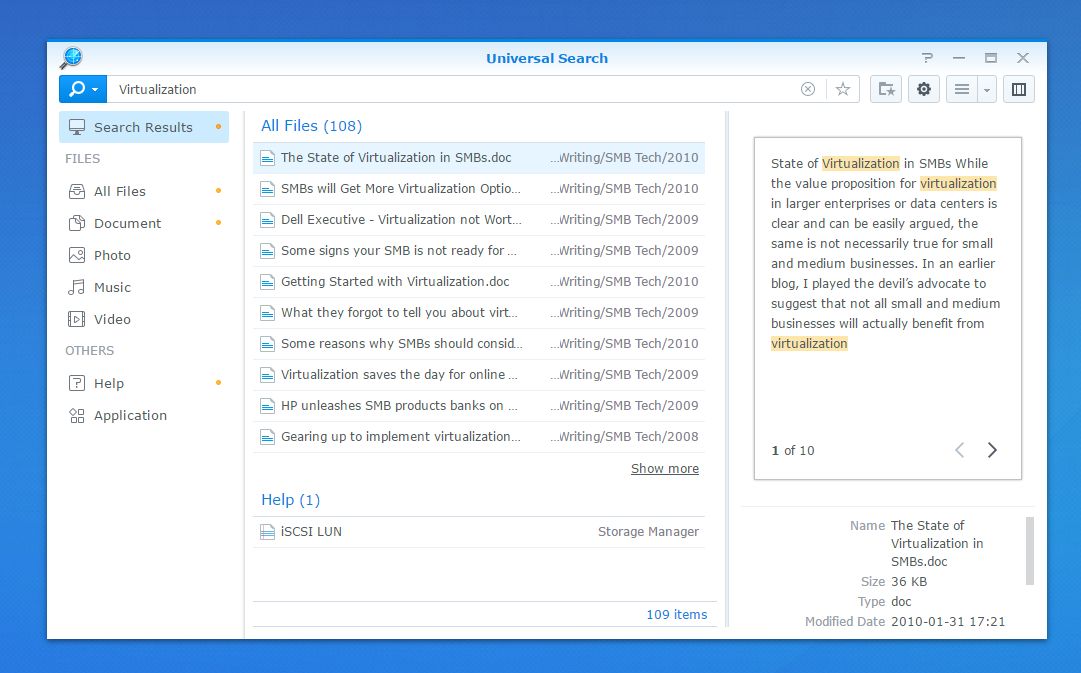 Preview isn’t full fidelity, but you can launch it in File Station, or download it directly

As its name suggests, the Synology Universal Search is a search tool to help users quick find a specific file on their Synology NAS. While it won’t help when accessing your storage volumes through a network share or iSCSI, users who frequently use the Web interface will find it invaluable, or if you find it too slow going to conduct a search through the network.

With almost 40GB of files (~20,000) on the two-bay DS716+ and consisting mainly Word documents, zip archives, and some media files, a typical search returns within a second. A preview panel on the right lets you quickly preview the list of files produced by a search, though it is not full fidelity and only shows the raw text of Word documents and PDF files.

Just like on Windows though, you will need to index your files using the Synology indexing engine first. Search history can also be saved if you like, and is configurable.

There is no question that DSM 6.1 contains a substantial list of improvements that businesses can look forward to.

Specifically, we feel that the release of Active Directory Server for compatible Synology NAS models to serve as an (almost) full-fledged domain controller in an office environment, coupled with the new Presto app to optimize data transfers between computers and a remote Synology NAS over the Internet – we will take a deeper look at it in a follow up piece –  brings the Synology platform to a new level of usefulness.

Do check it out when you have the chance to.