Integrating the cloud with a Synology NAS

Of course, it would be naïve to claim that there is no downside to public cloud storage services. Among the considerations would be the recurring cost – which can add up quickly. Moreover, the cloud is less suited for power users with large multi-gigabyte files that they need to access regularly, and is an uncertain defense against the data-destroying malware known as crypto-ransomware.

Yet there is also no doubting the many advantages that the cloud offers, especially its no-fuss access to geo-protected data storage, and the convenience of being able to access the same files across multiple devices. Is there a way perhaps, to use a network-attached storage (NAS) as you would a cloud service? Or perhaps to deploy it in tandem with a cloud service to build a more robust storage solution incorporating the strengths of both?

It turns out that the answer in both cases is “yes” when it comes to the recently released DiskStation Manager (DSM) 6.0 from Synology. We take a closer look at its cloud-centric features, as well as how it can integrate with some of the top cloud storage services out there. 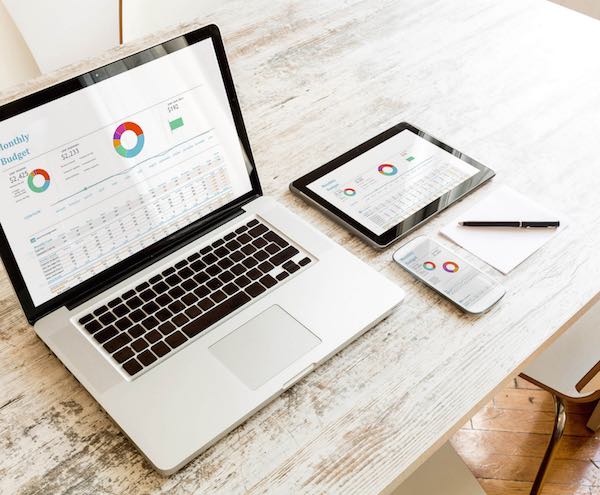 Officially released in March this year, DSM 6.0 was released with improvements across the board, including content Indexing of more than 700 file formats (including office documents), beefed up data protection capabilities, and deeper support for the cloud.

Users familiar with the the DSM platform will be interested to know that Synology had taken bold steps to address and pare down the bloat of features that have gradually crept in. This is a great move from a security perspective, as implementing too many services significantly increases the attack surface of the DSM. This can be an issue for users who may not have the time or inclination to check or ensure that the latest security patches are properly installed.

As it is, quite a few of the platform’s built-in features were modularized into packages in DSM 6.0, which should also translate into a less intimidating user experience. While this does mean an additional step to install the appropriate packages, we think it is a small price to pay for the much greater clarity about the capabilities offered by the various packages.

In addition, DSM 6.0 also comes with support for a file system called Btrfs, which is pronounced as “b-tree F S” or by simply spelling out the individual letters. Work on Btrfs initially began at Oracle where it was envisioned as an eventual replacement for the popular but ageing Ext3 and Ext4 file systems popular on Linux. Btrfs was actually first introduced in DSM 5.2, but it is only in DSM 6.0 that its capabilities are fully integrated and leveraged.

While we will be focusing on more consumer-centric capabilities of DSM 6.0 that are not reliant on the presence of a Btrfs volume, it may be a good idea that users to switch over to this file system all the same. Without going into the technicalities, Btrfs promises greater data robustness due to its ability to detect data corruption and automatically recover from them. 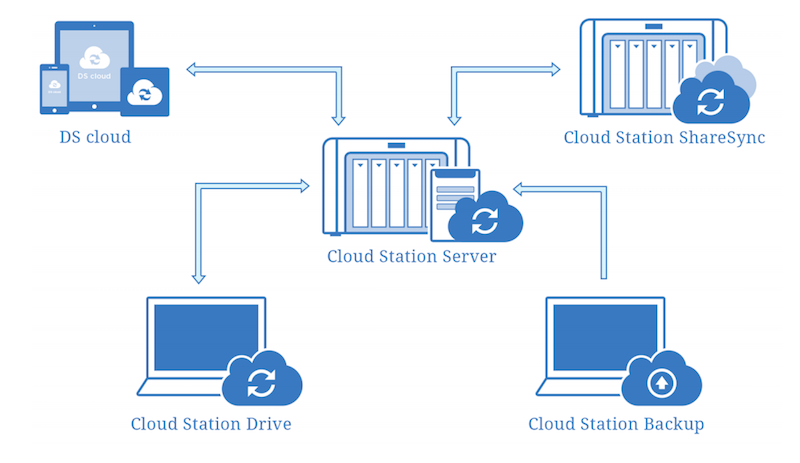 Setting up your own private cloud

Users looking to set up their own private cloud service on DSM 6.0 will need to first download and configure the “Cloud Station Server” package. The package essentially sets up the core Cloud Station cloud service on your Synology NAS, which works in a similar way as your favorite cloud storage service. Changes in files are automatically updated to other devices that are synchronized to it, whether they are another PC or laptop, a smartphone or a tablet.

To keep files synchronized on a PC, download and install the free desktop utility called Cloud Station Drive – previously known as Cloud Station – on your Windows, OS X or Linux machines. Note that you will need to download the free “DS cloud” app from your favorite app store for 2-way synchronization to your Android or iOS powered devices.

Cloud Station also supports functioning as a backup target for users who just want a backup tool to guard against data loss. To do this, you will need to install the Cloud Station Backup client utility on your PCs to back up your folders to the NAS in real-time. This will likely work well for less tech-savvy members of the family where having backups is all that is required.

What sets Cloud Station apart from your typical public cloud storage service is how separate sets of folders can be configured to be synchronized across different devices, and the ability to make this manual or automatic depending on file formats or file size. For example, only small but critical files can be synchronized to a smartphone, while larger documents are kept to PCs.

Under the hood, Cloud Station keeps up to 32 versions of each file, ensuring that accidental edits to documents don’t end up wiping out your hard work. According to Synology, an “Intelliversioning” algorithm helps to keep storage efficient by storing only the latest changes at the byte level, and not simply keeping multiple copies of each file.

Sync with a second Synology NAS

Users with access to more than one Synology NAS will want to know about the “Cloud Station ShareSync” capability. Previously known as Cloud Station Client, the service helps keep files synchronized between NAS appliances, and was originally envisioned to help a company to exchange data between its headquarters and branch offices as a private cloud service.

There are two key advantages that Cloud Station ShareSync brings to the table, with the most important being its ability to create a geo-backup of your data at no additional cost. Despite the extensive data reliability and redundancy inherent in a NAS, the risk of a localized disaster such as a fire, flood or even burglary is all too real. Cloud Station ShareSync eliminates these risks, and also improves performance when accessing large files.

Synchronizing with the public cloud 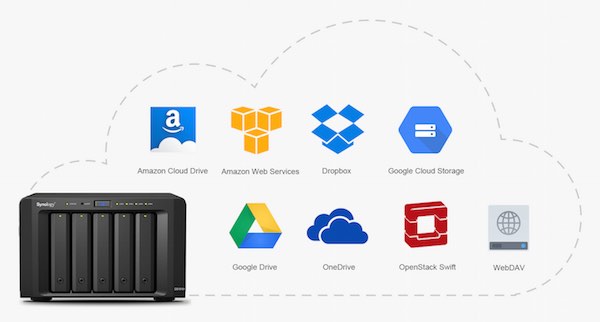 Finally, the “Cloud Sync” package makes it trivial to get your Synology to work with various public cloud storage providers. More than 10 public cloud storage services are supported at the moment, including OneDrive, OneDrive for Business, Dropbox, Google Drive, Baidu Cloud and AWS S3 Storage, among others.

Cloud Sync works by automatically synchronizing folders on your NAS with supported public cloud services. What is so powerful about Synology’s implementation is its flexibility, allowing for multiple ways to deploy the service based on your specific needs.

We highlight a handful of possible deployment strategies below.

Note that you can also define bandwidth limits so the syncing process does not interfere with your normal Internet usage.

While we outlined three broad ways in which a Synology NAS running DSM 6.0 can be deployed, it is entirely possible for more complex cloud-centric deployments and integration to be put together.

Finally, if you are using your Synology NAS for your business, or if you are a power user who prefer tapping into its business-centric capabilities such as Hyper Backup and Snapshot Replication, do check out “Synology DSM 6.0 for protecting your business data” here.