The Singapore Police Force (SPF) says that online crimes have risen significantly in the first six months of 2014 compared to the same period last year. 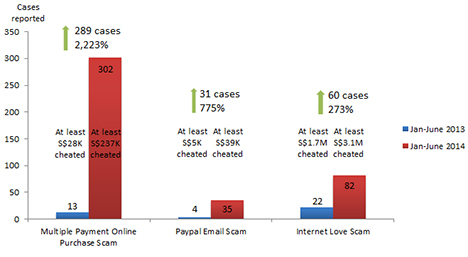 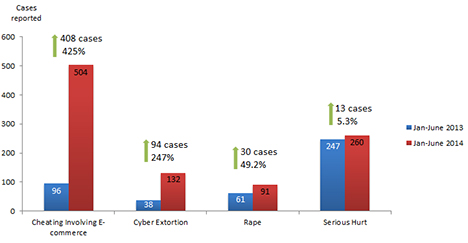 The Director of the Commercial Affairs Department, Tan Boon Gin, said: “The latest statistics show a distinct shift to crimes being perpetrated online. The most effective way to combat this is through crime prevention. In addition to our public education efforts, we will be studying the crime patterns to see how we can work with online platforms and financial institutions to remind users about online scams at the most opportune moments of a transaction.”

Internet love scams were the most expensive for victims, which are typically asked by ‘lovers’ over the Internet to send money on various pretexts. Twenty-two victims lost S$1.7 million in 2013, whereas 82 victims – a jump of 273% – were cheated of S$3.1 million in 2014.

Over 130 cases of cyber extortion were also recorded in the first six months of the year, representing growth of 247%.

“The Internet makes many everyday tasks faster and more convenient, like shopping, banking, research, and communicating on the go. But even the most tech-savvy need to understand that not everything we see on the Internet is true and people on the Internet may not be who they appear to be.”

“Crooks use clever schemes to defraud millions of people around the globe every year. They often combine sophisticated technology with age-old tricks to get people to send money or give out personal information. The challenge is to find a way to quickly spread information and alerts on scams so that we can prevent the next victim from falling prey. I believe the best vaccine against online scams is to immunise our community through public awareness, to get as many people as we can to talk about the scams.”

The police are using digital advertorials, articles and videos on social media and popular websites to make sure the public is informed about the latest scams. There is also a microsite to educate the public on various types of scams.

*This scam involves the sale of popular items like smartphones or tablets. Victims do not receive the goods, and are asked for further payments to address mixed delivery orders. The money is quickly transferred out of local bank accounts to overseas bank accounts which make the tracing and return of funds much more difficult. The local bank account holders may have been recruited separately just to receive money which they are then instructed to transfer to overseas accounts. A variation of this scam simply dupes victims into paying money for goods which are not delivered.

**This scam involves scammers buying items from online sellers by PayPal, and then sending the sellers fake ‘Paypal’ payment notification emails. The sellers then assume they have been paid and so send the ordered items. In addition, the scammers may also send other emails, supposedly from ‘Paypal’ or ‘Citibank’ , to the victims requesting payments for administrative requirements such as account activation.