Unlike conventional voice apps such as Skype and Viber that only work in high bandwidth 3G/4G/Wifi environments, the nanu vision is that it can be used on any network including 2G, allowing it to provide quality calls where other apps cannot, the company said. This opens up the world of free calls to the majority of the world’s mobile phones, many of which support 2G but not 3G.

Nanu also says that the entire phone experience will be free, including calls to non-nanu users on numbers such as landlines. Other companies at present offer some aspects of the phone experience free and make money on others. Line calls and messages are free but only to other Line users. Messages are free on WhatsApp to other WhatsApp users, and audio files may be attached, but voice conversations are not supported. A free voice service like Skype only works over 3G or better networks, with calls and video free to Skype users only. Skype charges for voice calls to a landline or to a mobile phone, and it is more expensive to call a mobile phone than a landline.

“…Existing apps have 2 major problems. First, they aren’t very reliable, especially in a poor cellular network environment. They struggle in congested 3G networks and just don’t work in 2G. Second, you can only call app-to-app for free. App-to-non app calls such as calls to landlines cost money. Telcos have been exploiting this for years by charging high roaming charges,” says Martin Nygate, Nanu CEO and founder.

“With our low bandwidth VoIP technology and advert sponsored business model, nanu has solved these problems. We are now able to offer completely free calls to everyone, anywhere – even on 2G networks. A customer proposition that will surely give the telcos a run for their money!”

Nanu’s business model is to rely on advertising to cover the cost of connections to landlines and mobile phones which do not use nanu. The app inserts a short advertisement that plays over the ringtone while the caller is waiting for the call to be picked up.

The catch is that calls to non-nanu users will not be free until there are enough people using it to attract advertising. Those who download the app today may make unlimited calls to anyone else who has also installed the app, just as with Viber, Line or Skype. Users will also have a limited number of free minutes to call non-nanu users.

“The more subscribers we have, the more advertising revenue we can generate and plough straight back into the system as more free minutes for you. Let’s all make this happen and put an end to those awful phone bills!” Nygate explained.

Specifically, nanu is promoting downloads by allowing the first one million users to download and use the nanu app to enjoy free unlimited nanu-to-nanu calls and also 15 free minutes of nanu to non-nanu calls across 73 global destinations. Depending on the number of subsequent downloads, this implies that nanu-to-nanu calls may require a fee for those who download nanu in future.

The app is available today on Android and iOS, with other devices to follow soon. Nanu will also be available for Mac and Windows. Download instructions are here. 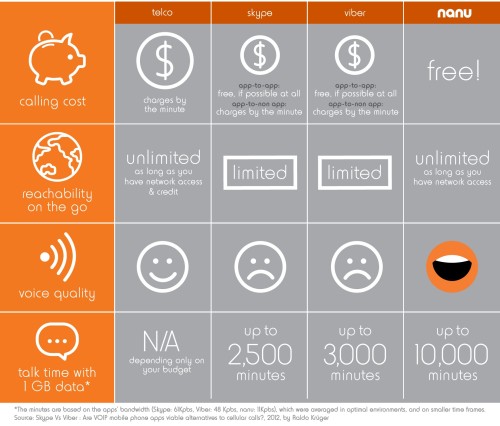