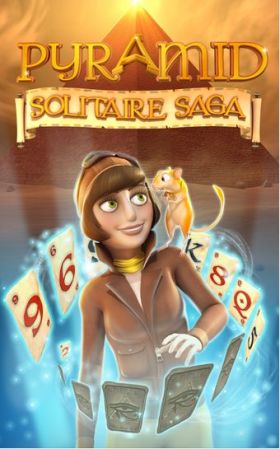 According to King, the game is “an epic journey to explore the lost relics of the ancient Egyptian world” interspersed with card matching, arranging and collecting brain teasers. Hosted by treasure hunter Helena and her gerbil companion Kingsley, players will explore lost worlds such as The Hidden Tomb, The Emerald Dream, the Garden of Osiris and the Depth of Nautilus, King said.

“We’re excited to launch our popular card-based Facebook title Pyramid Solitaire Saga on mobile platforms and offer players a new cross-platform gaming format to enjoy,” said Tommy Palm, Games Guru, King. “This fun new card game has a strong storyline that we think players will love exploring, as well as leaderboards where they can watch and compete against their friends.”

Similar to King’s Candy Crush, the game offers in-app purchases that may progress game play  much more quickly than choosing not to pay. The game’s description on the Android Play store, where the game has a rating of 4.5 stars, notes that “some in-game items such as extra moves or lives will require payment”.

Reviews of the game at the store share that the game starts requesting Facebook communications and/or payment from level 40. Pyramid Solitaire Saga currently has a total of 140 levels, with more to come.

The free-to-play game, last updated on July 2, is available on both iOS and Google Android devices. The Android version has seen at least 100,000 installs at the moment.