Independent video game publisher Versus Evil has launched Kyn, a Viking inspired role-playing strategy game, as well as a game based on the Afro Samurai animated series, in conjunction with their developers.

While the Afro Samurai sequel was not named by Versus Evil, IGN has reported that it is Afro Samurai 2: Revenge of the Bear. The sequel is in development at Redacted Studios for next gen consoles and PCs. The company holds the rights to the franchise.

Versus Evil said the upcoming third person action adventure includes an original storyline, new playable characters, and improved special moves and combos. More details about the Afro Samurai game will be released over the coming months. 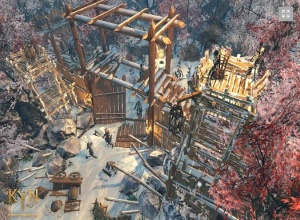 Kyn is set in a fantasy world where magic and the environment work hand in hand to overcome all obstacles. The game features team-based combat, exploration, and deep crafting systems, and will support PC, Mac and Linux platforms. Kyn is the first game that Tangrin, an independent video game studio based in the Netherlands, has worked on.

“Working with independent studios is truly rewarding and we couldn’t be happier to add Redacted Studios and Tangrin to a growing list of top indie studios,” said Steve Escalante, GM of Versus Evil. “Afro Samurai and Kyn are two excellent and promising titles that we are privileged to be publishing.”

Versus Evil, in partnership with indie developer 4gency, also announced June 26 that Habitat will be coming to Steam’s early access programme on July 8. Habitat was funded on Kickstarter in May, receiving more funds than its US$50,000 goal.

Habitat is a real-time, physics-driven orbital strategy game for PC, Mac, Linux and Xbox One where players build, fly, and fight with unique space stations they create out of space junk orbiting earth.

Gamers will be able to play a very early build of the game that will showcase just a small portion of the full feature set of this new strategic space survival game. The early access build will be for PC, Mac and Linux.

Finally, Versus Evil and Stoic also officially announced that their tactical RPG The Banner Saga will be coming to mobile platforms this summer (editor’s note: roughly June to September). The epic role-playing game, also inspired by Viking legend, features hand-painted and hand-animated artwork.