Hands on with the Microsoft Surface Pro 3

Microsoft this afternoon unveiled the Surface Pro 3 tablet for the first time in Singapore, and I had the opportunity for a short hands on with a demo unit that was available. For the uninitiated, the Surface Pro 3 weighs 800 grams and is 9.1mm thick. Under the hood, it runs a 4th generation Intel Core processor with up to 512GB of storage, 8GB of RAM, and a very enticing 9 hours of battery life.

Without going through the other specifications of the device (Click here for full pricing information), I wanted to quickly share my thoughts on it.

The Surface Type Cover keyboard looks like the same one that you find on earlier iterations of the Surface, though it did feel somewhat slimmer–not sure if it’s just my imagination. The keyboard also secured very well to the Surface Pro 3 and was remarkably stable, courtesy of the unique double-fold hinge.

The 12-inch screen of the Surface Pro 3 is startlingly vibrant and very nice to look at. Of course, the 2160×1440 “2K” resolution probably helped here. Moreover, the 3:2 aspect ratio certainly made things much easier than tablets that continue to sport a nonsensical widescreen format.

The micro-SD card reader was also cleverly hidden away behind the Continuous Kickstand, leaving the sides less fairly uncluttered (Unlike some Android tablets out there). This makes sense considering you don’t remove SD storage cards often, if at all. 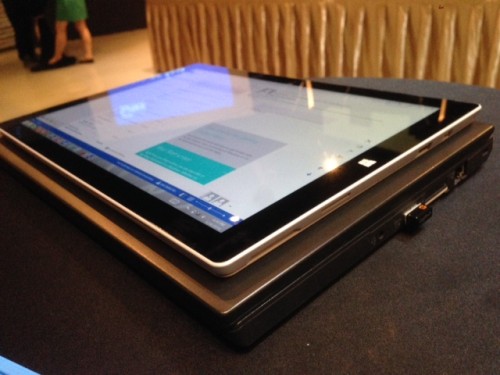 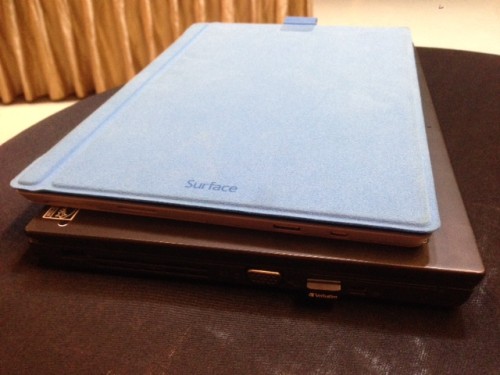 Using the Lenovo X240 that I am currently using as a comparison, the Surface Pro 3 is certainly very compelling in terms of its ability to run the full-fledged Windows 8.1 operating system, but in a significantly lighter and slimmer format. I estimate that two Surface Pro 3 with Type keyboard attached would be about the same thickness of the X240.

The not so good

One downside is that the edge of the display panel is actually flush with the Type Cover keyboard when the double-fold hinge is engaged. Not an issue if you don’t intend to touch the screen, but can be irritating if you’re trying to tap on the start button, or to tap one of the running apps on the Start bar.

Would I be comfortable bringing the Surface Pro 3 out with me like I would with my iPad? Probably not at the moment, and it’s just because the Surface Pro 3 is quite a few hundred grams heavier compared to the iPad. The main reason is really about the cost, given that even the lowest end Surface Pro 3 is substantially more expensive than the cheapest iPad Air.

As it is, I certainly won’t want to risk damaging the Surface unless I am properly seated on a sofa, or at a proper table. Of course, the equation would likely change should I be able to get a proper casing that can offer some protection against the occasional knocks and drops.

For folks who are interested, the Surface Pro 3 with a starting price of S$1,108 is expected to hit retail in Singapore before the end of August 2014. You can also pre-order at Microsoft Online Store here.