Alan Atkinson, who is the VP and GM for storage, and Tom Burns, the VP and General Manager for Dell Networking shared on the hardware at a media briefing held at the Pan Pacific Singapore Hotel earlier today.

Positioned at the mid-range fibre channel storage market, the SC4000 series is a family of full-featured storage arrays that offers enterprise-class performance for mid-tier deployments. Available in all-flash and hybrid array options, it is a SAN designed to support various workload demands, and can host up to 10,000 Microsoft Exchange user mailboxes in a single 2U appliance.

On its part, the Z9500 Ethernet switch is touted by Dell as the “densest, highest performing fixed-form factor switch” for scale-out data center and cloud workload designs. Taking 3U in space, it sports a total of 132 40GbE ports that is expandable to 528 10GbE ports with the use of breakout cables, as well as a throughput of more than 10Tbps.

I highlight some of the most interesting bits that I found out about the two appliances below.

The Dell team had a SC4020 unit at the event, which comes with 24 2.5-inch drive bays and eight fiber channel ports. While the family consists of the standard hard disk drive (HDD) version, the flash variant is probably the more interesting device by far.

IT professionals will no doubt be aware that SLC flash memory offers superior write endurance, but at a price premium that puts them beyond the budget of non-specialist applications. Dell has an interesting solution to this conundrum though, and offers built-in data tiering capabilities on the SC4020 that lets enterprises mix and match SLC and MLC SSD drives for the optimal price efficiency and performance.

The trick: Commit all data writes to the SLC, and occasionally update their data to the MLC drives. The data tiering strategy hinges on the premise that the read performance of a MLC-based SSD drive is no different from that of the SLC-based one. This strategy allows the price for an “all-flash” version to be driven substantially lower than competing products.

“We rewrote the [data] tiering level, focusing 100% of writes to the SLC,” explained Atkinson. “And depending on the write activity, the technology will do a snapshot over to the MLC level before the SLC is de-committed.” According to Atkinson, there is no difference in the read performance of such a deployment versus an SLC-only flash setup.

Obviously, there is some complexity to setting up the SC4020 for optimal performance. According to Atkinson, the general rule of thumb is to have an 8 to 1 ratio for SLC and MLC-based drives. Dell does offer the requisite tools to profile usage and adjust the ratio of SLC SSD and MLC SSD correctly.

“If you’re uploading movies and 4K files that are tons of tons of data, you will have to raise the ratio,” says Atkinson. And if you have an app that relies heavily on write, then spinning disks may be an option to consider, he suggests. The Dell Storage SC4020 is available from today. 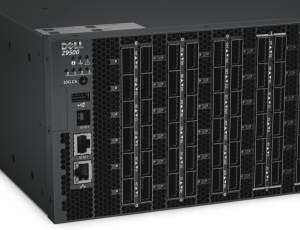 Instead of forcing businesses to take down their switch to install new hardware line cards when upgrading, the Dell Networking Z9500 comes with all the requisite hardware already in place. Businesses can purchase license upgrades at a later date to “add” networking ports on-the-fly via its management software.

This eliminates the need to schedule downtime to install new hardware cards, making it perfect for the non-stop pace of data center operations. In addition, this presumably reduces the cost to design and engineer the bays required for supporting pluggable line cards, and keeps the chassis that much slimmer.

Burns told me that three different SKUs of the Z9500 are offered: 36 ports, 84 ports or all 132 ports enabled. Note that each 40Gbps port supports a breakout port for four 10Gbps ports. Of course, this means that Dell would have less margin on the 36 port version than with the 132 port version, though this formula undoubtedly offers greater value for smaller enterprises.

Finally, the Z9500 is naturally air-cooled without the need for expensive air-conditioning, says Burns.