On May 27 (May 28 Singapore time), Microsoft announced a number of new mobility-related apps and updates in the US, with Office for the iPad garnering the most attention from the media.

Free mobile apps for Microsoft and Android were inserted into the press release almost as an afterthought in the first paragraph, and not referred to again. Slightly more detail was provided in the associated blog post, but it seemed again like an afterthought, inserted in between two paragraphs describing Office for iPad: 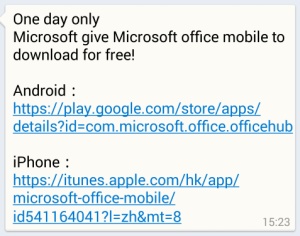 The lack of detail prompted an interesting text message which went viral by March 29. I received it on WhatsApp from two separate sources:

“One day only… Microsoft give Microsoft office mobile to download for free! (sic)” ran the text, and gave the download links for Android and iOS after that.

Given that many mobile app developers often make their apps free for a limited time, and Microsoft known for charging for its software, it would have made total sense to many that Microsoft could have allowed its apps for free on a promotional basis for 24 hours, and then returned to charging for them after that. After all, why wouldn’t the company want to profit from selling its software?

The download numbers must have been phenomenal over the weekend. While the cynical might claim that Microsoft itself (or its partners) might have come up with such a text in order to show significant interest from users just after the announcement of the apps, it would have been in their interest to stress that the apps are actually free indefinitely.

Could it be more sinister, that a competitor came up with the message so that potential users stay away from the apps now because they think the apps have to be paid for?

The reality is that Office is widely popular. Those who want to use Office will still consider using it and are likely to visit Google Play or the App Store to have a look. If the apps are still free by then, so much the better.