Getty Images, one of the most prestigious stock image providers in the world, has announced that it will make low-resolution images in its stock image library free for non-commercial use. Anyone with a blog or who would like to illustrate a point on Twitter will be able to take a picture from their library to use, without paying for it.

Commercial use, said the company refers to whether the image is actually used to promote a business, goods or services, or to advertise something. If not, it is a non-commercial use, freeing blogs with ads to go ahead to make use of Getty Images’ stock pictures.

The company would previously have asked for payment. Today, a picture of the Singapore skyline would have cost US$25 for a 72 dpi (screen quality) royalty-free image, ranging to US$1,069 for the same image. Royalty-free images, despite the word ‘free’ in the name, are images that typically have to be purchased once and then can be reused without penalty within the limitations of the agreement, as opposed to images which are purchased for a specific use and duration, such as a three-week advertisement campaign in a newspaper.

The reason, Getty Images said, is the rampant piracy that is occurring. In a post on Flickr, the company said:

“Many of our images are being shared, re-shared and used in this space already, much of it without attribution, watermark or license despite our aggressive and continuing compliance program. Unfortunately, it is not economically viable to pursue individuals for non-commercial use given the cost of enforcement, the exploding extent of unauthorized use, and the reality that individual infringers usually have a limited ability to pay.

“Getty Images’ content is highly relevant to ‘new’ media so we see an increase in our content being used without a license or image credit; often accessed via aggregators such as search engines or from legitimate customers’ websites. As a result, attribution is lost as is our ability to track usage and potentially earn revenue.”

Getty Image’s ’embed’ feature permits free non-commercial use subject to Getty Images’ terms and conditions of use and will eventually wean image users over to paying for images, the company hopes. “Embedding will benefit Getty Images and our contributors by promoting our imagery in digital media, linking to licensing and by setting the stage for engaging new revenue streams. By encouraging non-commercial use and sharing of embedded images in blogs and social media sites, we can actually begin to transform these users into an active digital marketing channel.”

While Getty Images is right in that it is easy enough to share an existing image around without thinking about attributions or copyrights, and such practices are very common, the truth remains that Getty Images has not been as popular as Shutterstock or iStockPhoto for commercial use.

Both offer cheaper images which are often more suited for corporate use, and their terms and conditions are typically very simple – buy and use anywhere you like. A package from Shutterstock can work out to about US$10 to US$20 for an image that can be used in a brochure.  Compare this to US$499 for the equivalent version of the Singapore skyline image on Getty Images. 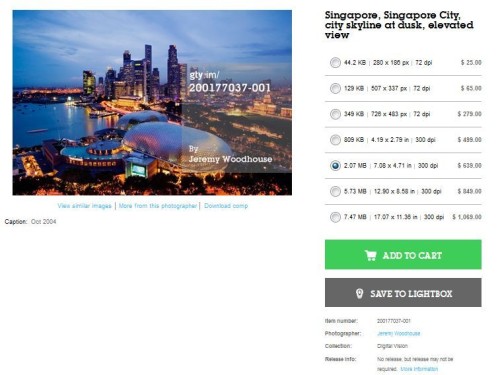 Getty Images also hopes that the ‘freemium’ business model works out for them – attract users with the free product, then charge for additional features. “When embedding, users are notified that by embedding our images they accept our terms which restrict use, allow us to track use and gives us the right to monetize the embedded image without compensation to the user,” Getty Images said.

Freemium models have indeed been successful, but only if there are no alternatives. In Getty Images’ case, there may be cheaper alternatives out there, and of course the good old screen capture tool as well. While a lot more users will be visiting their stock library, only time will tell whether widespread exposure to its images will indeed lead to more revenue.