On February 20 Ramsey Homsany, General Counsel at Dropbox, posted on the Dropbox blog that the company will be emailing users about updates to its Terms of Service, Privacy Policy, and online Dropbox for Business Agreements, effective March 24, 2014.

The move has implications for anyone anywhere around the world who uses cloud-based services, as most of us do. The major changes involve arbitration clauses to Dropbox’s Terms of Service and the Dropbox for Business online agreement, while permissions and privacy were also mentioned.

“Arbitration is a faster and more efficient way to resolve legal disputes, and it provides a good alternative to things like state or federal courts, where the process could take months or even years,” Homsany said in the post, ending with a reassurance that Dropbox users retain ownership of their data:

“While we’ve simplified much of the language, our commitment to keeping your stuff safe and secure hasn’t changed. We don’t sell your personal information to third parties. We don’t serve ads based on the stuff you store in our services. And, as always, your stuff is yours.”

Over the weekend, a blog post from Quibbling has gone viral. Author Tiffany Baxendell Bridge encouraged readers to opt out of arbitration. “No matter what they do (delete your data, privacy breach, overcharging, whatever), you don’t get to sue. Instead, THEY get to choose the arbitrator according to whatever criteria they want, and thus any dispute is decided by someone they’re paying,” she said in her post. “The agreement we make with Dropbox is too important to be enforced only by an arbitrator of their choosing.”

Nobody quite knows what happens whether the Dropbox user opts in or opts out but is outside the US as different countries have different laws about data sovereignty. Bridge’s argument makes sense however, so those who would like to opt out of arbitration in the Terms of Service can fill out an online form.

Others are more concerned about the changes in privacy that have been announced and worry that Dropbox may encrypt their data, but be able to read it and share it elsewhere. Lifehacker has suggestions for encrypting the data stored in Dropbox for those who are worried about this.

And if the problem is Dropbox, there are other competitors for cloud storage out there; Microsoft’s OneDrive (formerly Skydrive) and Google Drive for example. 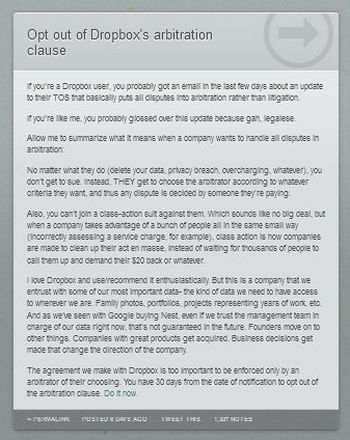