Apple embeds iOS into your dashboard with CarPlay

What’s better than an iPhone? A car that integrates seamlessly with your iPhone which could replace CDs, broadcast radio, and independent navigation systems and have mobile internet service providers laughing all the way to the bank.

Apple announced March 3 in Geneva that its iPhone ecosystem is now expanding to include cars. According to the company, major car manufacturers are rolling out CarPlay, a “smarter, safer and more fun way” to focus on driving, while also tapping into everything they want to do with their iPhone. 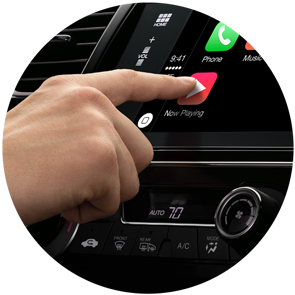 “CarPlay has been designed from the ground up to provide drivers with an incredible experience using their iPhone in the car,” said Greg Joswiak, Apple’s VP of iPhone and iOS Product Marketing. “iPhone users always want their content at their fingertips and CarPlay lets drivers use their iPhone in the car with minimised distraction.”

CarPlay is a safer way to use the iPhone while driving. Once the iPhone is connected to a vehicle with CarPlay integration, drivers can control CarPlay from the car’s native interface or use the voice control button on the steering wheel to get Siri, Apple’s voice-activated interface, to access contacts, make calls, or listen to voicemails.

CarPlay also makes driving directions more intuitive by working with Maps to anticipate destinations based on recent trips via contacts, emails or texts, and provides routing instructions, traffic conditions and the estimated time of arrival. Drivers can also ask Siri for spoken turn-by-turn directions, along with Maps, which will appear on the car’s built-in display.

CarPlay gives drivers access to all of their music, podcasts, audiobooks and iTunes Radio with easy navigation through listening choices from the car’s built-in controls or simply through asking Siri for specific audio. CarPlay also supports select third-party audio apps including Spotify and iHeartRadio.

On March 4, Volvo announced that its first car to support CarPlay will be the all-new XC90 SUV, to be introduced later in 2014. According to Volvo, the latest XC90 SUV replaces the original XC90, which redefined the SUV and became the best selling model in Volvo’s history.

Volvo has designed an interface that allows drivers to use voice and touch controls to access Apple features and services. A portrait screen gives users the benefit of having both Volvo and Apple content co-existing simultaneously, removing the need to switch between a dedicated car and iPhone screen.

“iPhone users will feel completely at home in a new Volvo. We have created a wholly-integrated user experience in our large portrait-oriented touch screen that takes the in-car mobile device experience to a new level. That, coupled with the obvious driver safety benefits of an advanced voice control system like Siri, made Apple a perfect match for Volvo,” says Håkan Samuelsson, President and CEO, Volvo Car Group.

Apple CarPlay is available as an update to iOS 7 and works with Lightning-enabled iPhones, including iPhone 5s, iPhone 5c and iPhone 5. While Apple makes no mention of it, getting a car charger for the iPhone is probably a good idea as well.