The smart pen, which promises to be an easy way to input handwritten materials automatically, just by using the pen with paper. Tests have already been conducted in Hong Kong, the company said. 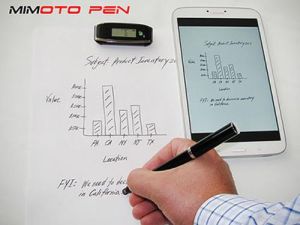 “It’s a great product with a lot of potential to revolutionise the way we look at note taking,” stated Founder Roman Gudzyuk. “Nobody really thinks about how or when they take notes, it’s a habitual process and we just do it because we have to. But it’s definitely a big part of our lives and can be very time consuming.”

Mimoto Tech’s pen automatically transfers anything written with it directly to an iPhone, iPad, Android devices, BlackBerry, Mac or PC, as you write it. According to the company, the pen looks and writes just like any other ballpoint pen but uses ultrasound and infrared sensors similar to the ones found in popular gaming consoles to detect motion, and communicates with the mobile devices or computers through Bluetooth.

The company also says the same pen can turn any computer or laptop screen into a touch screen when an integrated receiver is switched on, and the pen is used as a stylus.

The Mimoto Pen will be launched on Kickstarter for preorders on February 22. More information is available at Mimotech’s Facebook page, which currently has over 600 ‘likes’.