It began in the morning on 4 February. M1 customers began reporting signal failure and asking each other on social media if the mobile network was down. At 8am, M1 acknowledged the problem, posting contritely on Facebook that some customers “may be experiencing difficulties sending text messages or making voice calls”.

M1 has since released a statement on the whole affair that notes that customers began experiencing difficulties making voice calls on their mobile network from 7am, with some customers also “unable to send and receive SMS or access mobile data, intermittently”. 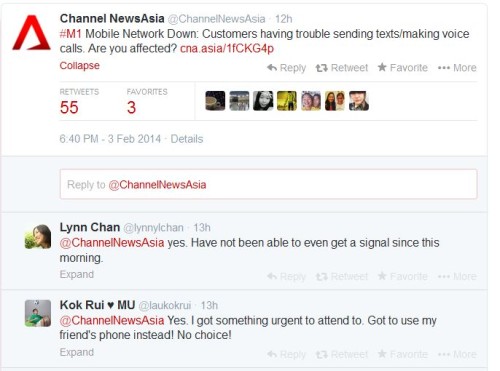 The service provider has explained that it takes time to restore services on a complex network, and notes that “full service was restored at 12:15pm.” According to M1, preliminary investigations suggest that “a call processing software issue had unexpectedly prevented our customers’ devices from registering on the mobile network”.

“We are sorry for the inconvenience caused to our customers. We take this incident very seriously, and in addition to our own investigation, we will be appointing an independent expert to conduct a network architecture and connectivity review,” said Karen Kooi, Chief Executive Officer, M1.

Ms Kooi added: “We appreciate our customers’ understanding, patience and support, and we would like to offer our customers one day of free local mobile calls, local SMS and MMS this Sunday (Editor’s note: 9 February) as a goodwill gesture.”

By 1pm, the company had posted on Facebook that mobile services had been fully restored. “For customers who are still experiencing difficulty connecting to network, please turn off and then turn on your mobile device. If the issue persists, please drop us a note via http://csfeedback.m1.com.sg/ so that we can quickly look into it.”

M1 did everything right in theory. They admitted that there was a problem through Facebook, reaching a maximum of 110,490 fans, apologised for it, and told customers that they were working to fix things. When they had found a solution, they announced it, and are committed to conduct further investigations. They are also giving subscribers free local calls and messaging on Sunday.

Why then was there so much unhappiness above and beyond the obvious inconvenience of not being able to use the M1 mobile network?

When the network came back at what M1 said was 12.15pm, many customers did not see services restored. In fact, I only saw my mobile signal return at about 1pm, and even then, mobile data services did not immediately work for me. They did within the half hour, without the need to reboot the device, but a similar lag would also have led to customers feeling even more shortchanged.

Third, M1 is offering free local calls and messaging on a Sunday, when its services went down on a working day. Many will feel it is not an apples-to-apples compensation when there would be much less M1 traffic on a weekend compared to a weekday, when there is likely to be work-related mobile use. Lastly, mobile data customers will presumably not be able to enjoy free data usage.

Such outages are hopefully not going to be common, but choice of language and a more equitable goodwill gesture the next time might go a long way towards happier M1 customers.