‘Guest Mode’ in LG smartphones a great feature to have

The LG G Flex is a very interesting 6-inch Android smartphone that was unveiled for the first time in Singapore earlier this month. Though I wasn’t able to attend the launch event, Lydia went and managed to take some photos of this very interesting smartphone: It comes with a curved screen as well as an amazing 3,500mAh Li-Polymer internal battery, also curved. 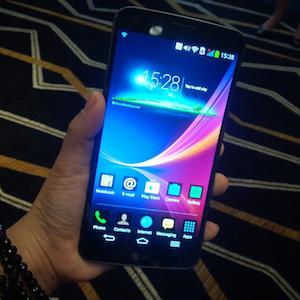 Holding the LG G Flex smartphone with its curved screen

According to LG, the G Flex follows the curvature of the face in portrait mode, which in turn enhances voice quality by reducing the gap between the mic and mouth. I’m not so sure how this translates in real-world usage, but it did get me looking more closely at various LG smartphones and the various features they offer.

For example, the G Flex has a feature called Dual Window that divides the screen into two panels. While it’s not the first smartphone with this capability, it certainly a good feature to have on its wide, curvy display. On its part, the LG G2 has a special feature that the company calls “Guest Mode.”

As you would probably have guessed by now, Guest Mode allows users to share (or show off) their smartphones by displaying only a pre-selected list of apps when passing their phones to friends or acquaintances. This mode is entered into with the use of a secondary unlock pattern; wish more smartphone offer have such a feature.

I suppose Scott Jung, the managing director of LG Electronics, Singapore sums up the design philosophy of LG best in an emailed statement:

“We have incorporated Smart features within our TV and mobile phones such as NFC Tag On, Smart Share, Miracast and WiDi to harness technology to improve the way our customers can engage with their devices.”

I’ve admittedly never really paid much attention to LG smartphones before, though the design does strike me as quite attractive now. As such, may just give them a try one of these days.