Three Things I love about the BlackBerry Z30 smartphone

Equipped with a 5-inch screen and upgraded hardware, the new BlackBerry Z30 smartphone offer substantially more real estate than the older Z10 smartphone. I had the opportunity to use the Z30 since before its release in Singapore at the beginning of October, and found myself liking it very much.

A quick backgrounder on myself: I’ve been a long-time BlackBerry user, having started with one of the first color models. Since then, I’ve continued with various models over the years, including a time when every other friend seemed to be using one, and through its decline in popularity when the launch of the new BlackBerry 10 platform was delayed. I currently use a BlackBerry Q5 I bought as my primary “work” phone.

BlackBerry smartphones have always exhibited excellent battery life compared with other offerings on the market. However, the focus on releasing a more consumer-centric product (and the switch to standard Exchange ActiveSync) meant that the battery life on the newer BlackBerry 10 smartphones just wasn’t as good as the BlackBerry 7 models.

The Z30 brings this BlackBerry forte back with its excellent battery life. Like a majority of smartphones out there, the Z30’s battery isn’t removable – and it doesn’t need to be – not with its generous 2,880mAh capacity. I have been using the Z30 as a Wi-Fi hotspot to tether my MacBook laptop for work. With heavy Web surfing and checking of emails, I was amazed to find the Z30 left with 40% battery life after a marathon 7.5 hours session. 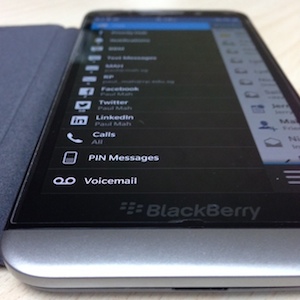 I get lots of messages each day, from different email accounts and social media feeds. Rather than having to stab individually at a million different apps to check my text messages, missed calls, emails and other messages, the BlackBerry Hub combines everything into a singular place that I can take in with a single glance. While the BlackBerry Hub is not unique to the Z30, the much larger screen of the Z30 does serve to further bring out the shine of the concept of the BlackBerry Hub.

A perennial and somewhat justified complaint of the BlackBerry 10 platform is its relative lack of apps. Fortunately, a lesser-known ability of BlackBerry 10 smartphones for the ability to “sideloade” Android apps alleviates this issue. For obvious reasons, BlackBerry doesn’t advertise this capability, and the conversion process, while simple, probably isn’t suited for everyone.

This ability does make the BlackBerry platform a really great platform for hackers (The kind that like tweaking their gadgets). Where the Z30 is concerned, its faster processor and larger display makes the experience of running to be better than ever. Here is a list of my favorite apps that I have successfully loaded onto the Z30:

And if you’re looking to load Instagram onto your BlackBerry 10 device, Simon Peter has a nifty guide for getting it to work. Check it out here.