Toshiba Portege Detachable Ultrabook offers the Best of both Worlds 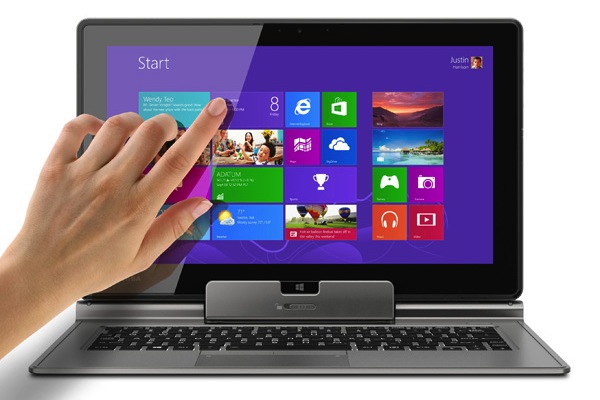 Many of us have often encountered the rather perplexing scenario of trying to decide whether to bring the laptop out, or the tablet. The cause of this dilemma is simple: Laptops simply don’t deliver the convenience and portability offered by a tablet; while a tablet is ill-suited for many work activities such as writing a long email, or conducted a presentation, for example.

And if you’re like me, you may at times find yourself lugging both laptop and tablet along when heading out, enduring a heavier bag just for the sake of “playing it safe.” Well, the newly released Portege Detachable Ultrabook by Toshiba appears to have what it takes to completely eliminate this problem.

Tablet and Ultrabook in one

While it looks like another slim and stylish Ultrabook running on the Windows 8 platform from afar, the Portege Detachable Ultrabook is really a tablet and laptop-in-one. The high-resolution (1920×1080) 10.6-inch IPS display portion of the device is detachable from the keyboard dock and used as a stand-alone tablet.

It is no certainly no slouch as a tablet: The screen supports 10-finger capacitive touch, and is also strengthened with Corning Concore Glass. Moreover, full-size SD card slot and micro HDMI port is also built into the tablet, giving it storage expansion capabilities as well as the ability to work with an external display.

To it as an Ultrabook, simply connect the tablet back to the keyboard base by inserting it into the sturdy locking hinge mechanism. This adds additional ports such as a VGA port, Gigabit Ethernet LAN, HDMI and a USB 3.0 port. On top of this is a full-size keyboard that is backlit and spill-resistant. And yes, there is even a built-in touchpad as well as an AccuPoint pointing stick for those who prefer using it.

Though Toshiba is not the first computer maker to come up with the tablet with a design that involves the use of a docking keyboard, it does appear to be unique in its incorporation of business-centric capabilities. This ranges from the built-in Trusted Encryption Module (TPM) and fingerprint scanner, as well as the presence of a Gigabit Ethernet port.

Often the first port to be eliminated in Ultrabooks, the on-board Ethernet allows enterprises to troubleshoot problems or install new software updates in a shorter amount of time. One final point that impressed me was the extremely slim profile of the Portege Detachable Ultrabook, measuring a mere 0.48-inch (12.2mm). It is also a very lightweight too, tipping the scales at 3.19lbs (Ultrabook) and 1.87lbs (Tablet only).

Ultimately, the various business-friendly specifications should allow the Ultrabook to integrate well into enterprises, while its good looks should go a long way in ensuring that employees are open to it as their next desktop or laptop upgrade.

This is a paid post in conjunction with IDG and Toshiba