The Business Tablet with Desktop Capabilities 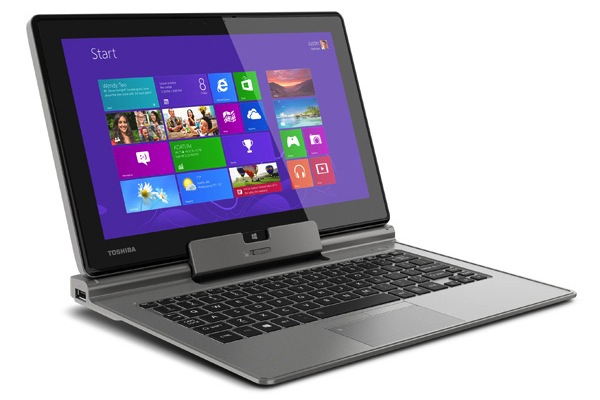 Even the staunchest opponent of the tablet would have conceded by now that the tablet form factor does offer an inherent convenience in terms of portability and ease of media consumption. Despite its popularity with consumers, the tablet has not been able to replace corporate workplace due to a number of limiting factors.

One main reason is that tablets lack a physical keyboard for intensive data input. While a separate Bluetooth wireless keyboard solves this problem, it does entail lugging around a separate component that can be forgotten or dropped.

Moreover, tablets also lack important security features necessary in an enterprise environment, and come with the requisite peripheral ports for hooking up additional devices or a an external display.

However, things are set to change with the arrival of a new breed of Windows 8 hybrid and convertible devices arriving on the market. The latter typically marries a tablet with a docking base that transforms (or converts) them into a full-fledged Ultrabook, allowing it to be used either as a tablet or an Ultrabook.

Under the hood, the Ultrabook is powered by an Intel Core i5 (or i7) microprocessor with Intel HD Graphics 4000 for graphics. RAM is a reasonable 4GB, while storage can be either 128GB or 256GB of speedy solid-state drive (SSD).

Additional storage can also be added using the built-in memory card reader, and the Ultrabook will work seamlessly with existing projectors and monitors for presentations – thanks to the presence of a micro HDMI port, a full-sized HDMI port and a VGA port.

It was quickly evident that the Portege Detachable Ultrabook would be an excellent device for mobile workers. Unlike most Ultrabooks on the market, it comes with security features such as TPM and a fingerprint reader built-in. Conformance to enterprise security needs was clearly an important design consideration, as the Trusted Platform Module (TPM) chip is a dedicated crypto processor designed to safeguard cryptographic keys.

Indeed, the Ultrabook even comes with a security cable lock slot, which will come in very handy for workers who travel often, or as a means to secure the device in parts of the office that may be accessible to outsiders. And yes, the entire device inclusive of the keyboard dock weighs a mere 3.19lbs (1.45kg), or 1.87lbs (0.85kg) as a tablet.

This is a paid post in conjunction with IDG and Toshiba