Making the switch from Intermedia to Office 365

I recently terminated my hosted Exchange account on Intermedia and made the transition to Microsoft’s Office 365.  The decision was not an easy one, given that I have been with Intermedia since December 2009, and have enjoyed their prompt technical support and rock stable reliability.

Indeed, I wrote about the Benefits of Switching to Hosted Exchange 2010 in an SMB Tech blog the same month, where the quote “One reason I opted for Intermedia is due to it being the world’s largest provider of Microsoft Exchange hosting… I am left impressed by the stellar and prompt technical support” was used in the company’s publicity material and website.

To be clear, my impression of Intermedia has not changed since then.  So what prompted me to make the move? Well, they can be distilled to the below three reasons.

As I wrote in Making the Big Move to Microsoft’s Office 365, one of the primary reason has to do with cost.  This is two-fold: Intermedia has revamped its service plans since I signed up and has phased out single-account plans, while the combination Telco-imposed BES tariffs and Intermedia’s charges looks plain ridiculous in a world where both my iPad and iPhone can access Exchange at no additional costs.

A side advantage of going with Office 365 is related to how Microsoft works to place its cloud in various geographical regions to better serve customers from all over the world. This is extremely important in Singapore where ISPs (Internet Service Providers) are known to play a game of “international bandwidth” versus “local bandwidth.”  Being “local” is hence a huge plus point.

One thing for sure however, I have no desire of incurring the licensing cost and maintenance overhead of running my personal Exchange server again.  It may be worth noting that the hassle of running my own server (despite being able to) was what prompted me to switch to Intermedia in 2009.

Of course, some technical knowledge is still desirable when making the switch to Office 365, especially if you intend to use Microsoft’s Plan P with your own domain name. To that end, I wrote an article on TheEmailAdmin outlining the requisite steps to take last month. In closing though, I will say that I am happy with Microsoft’s Office 365 offering in general and Exchange Online specifically. And yes, being the creator of Exchange Online has also meant that I’ve not experienced any scheduled downtime since I signed on (so far). 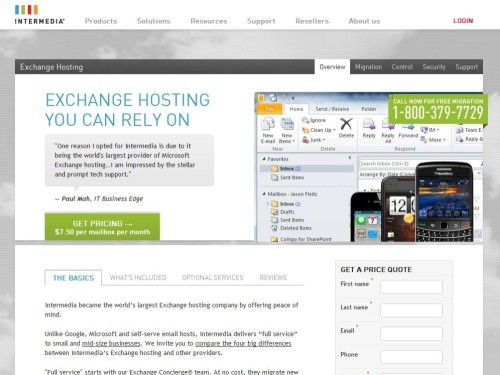 Screenshot of the Intermedia Hosted Exchange page featuring my quote - they've changed it to reflect endorsements from other parties since I made the switch.