The business proposition behind the company’s range of expansion products is simple: to enable a migration path for existing investments in terms of specialized (and expensive) PCI Express peripheral cards such as those used for video capture and editing, broadcast video, pro audio, scientific data acquisition devices etc.

Specifically, Magma’s products can also be used to dramatically increase the expansion option for laptop devices.  For example, the company’s ExpressBox1 chassis makes it possible for me to use my old 11-inch Sony TZ laptop and a Matrox M9140 quad-output display (1920×1200 each) to drive an additional four LCD monitors. (See Mission Control refresh 2011 Edition)

The ExpressBox 3T will essentially be the beefed-up, Thunderbolt version of its ExpressBox range of expansion chassis.

According to Magma, the ExpressBox 3T will support:

Though there are no Thunderbolt devices announced for PCs at the moment (Only for new Macs at the moment), its incredibly fast 10 Gbps throughput promises to open the door in terms of expansion capabilities for laptops.

Already, Sony has created a docking station utilizing the technology, albeit with a proprietary connector for its latest Sony VAIO Z laptop.  As an actual implementation of its potential, the Sony docking station comes crammed with peripheral interconnect options such as USB 2.0, USB 3.0, Gigabit LAN, HDMI and VGA output, and sports a built-in AMD graphics card as well as an optical drive.

I’m personally looking forward to the availability of Thunderbolt on PC devices, and the ExpressBox 3T looks like it will be a “must-have” device for power users when that happens.  No pricing or availability date have been announced for the Magma ExpressBox 3T. 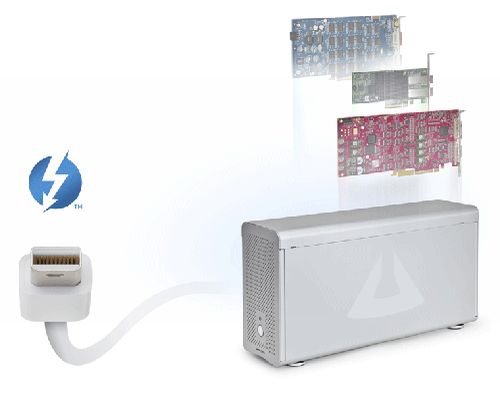