Some multi-monitor rigs from around the world 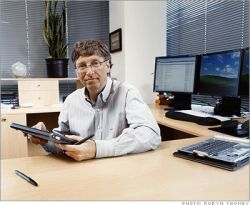 I recently convinced a friend to get a new monitor for a dual-monitor setup, which led me to think again about the use of multiple monitors.  You see, I’m an advocate of using multiple monitors for productivity and health reasons – I believe they help you work faster and is better for your eyes in the long run.

The problem however, is that many people instinctively consider having even two monitors (never mind more than two) to be a luxury and unnecessary.  This immediately closes their mind as they file it under the “too expensive” without even considering the various benefits of working with multiple monitors.

Yet many would spend over a hundred thousand dollars to get a new car (It currently costs more than US$40k just to get a COE license to own a new car in Singapore) and would not hesitate to splurge thousands more on luxury items like designer handbags or watches that adds nothing to productivity.

Even billionaire Bill Gates admits to using three monitors in his office in a 2006 interview by Fortune.  You can read the article published on titled How I Work: Bill Gates.  In addition, the prices of LCD monitors have dipped substantially since 2006, and it may surprise you that the four LCD monitors on my home office desktop costs about the same as a 64GB iPad2 with a couple of accessories. Finally, a good LCD display can probably work for longer than five years, and is easily migrated to newer desktops or laptops.

So why don’t you give an additional monitor (or two) some consideration today?  And to show you how comparatively tame my own setup is, I’ve attached some pictures of various multi-monitor rigs below. 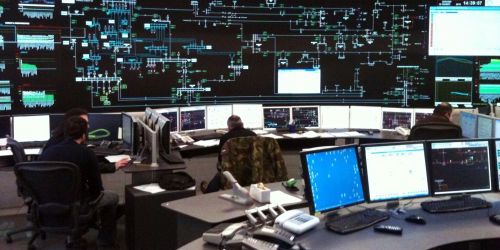 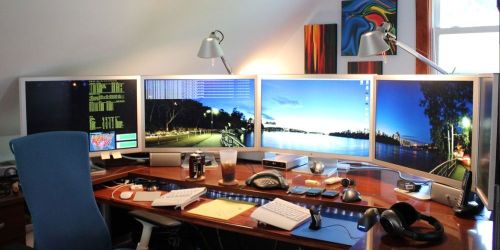 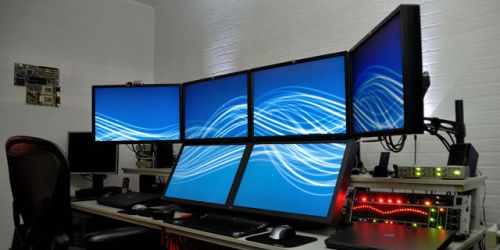 Stefan Didak’s home office desktop with erm, a lot of monitors (Click on picture to go to Didak’s site)