Peplink Balance appliance for powerful, easy to use WAN load-balancing

I’ve been using various Peplink WAN load-balancing hardware for more than a year now, and have found it to be a powerful, yet easy to configure appliance.  Ease of use is certainly important here given that load-balancing is not necessarily the easiest item to configure for techies and non-techies alike. And yes, while a Peplink will typically work well straight out-of-the-box, some IT background will go a long way when tweaking its configurations.

I’ll blog a little more about the various load-balancing options another day, though what I wanted to highlight today is the sheer reliability of the company’s operating system and hardware, a trait which I mentioned in my recent report on ITBusinessEdge recently.  Titled Peplink on Enhancing Business Continuity with WAN Load Balancing, I wrote the article after interviewing General Manager Keith Chau at CommunicAsia 2011 this year.

Anyway, below is a screenshot of the dashboard for the Peplink Balance 30, a 3x WAN port device targeted at the lower-end market such as power users and home office users.  As you can see, the device has been up for over three months without being switched off and is still working flawlessly.  Ironically, my Internet modems probably saw more resets.  Indeed, the uptime could have been higher were not for a firmware update that required the Balance 30 to be restarted. 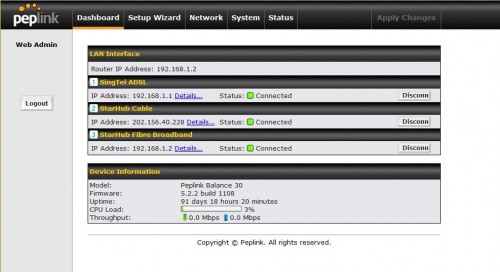