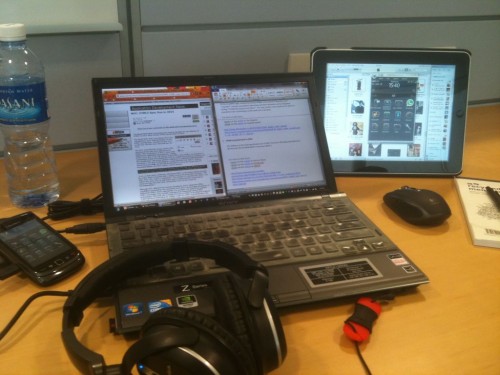 I wrote about My Workstation last year, and thought it will be fun to post the “mobile” version of my desktop today.  While I do the bulk of my writing on my home office workstation, I do have multiple breaks throughout the day when I lecture.  As such, I try to maximize my time by doing some of my work at the “Hot Desking” facilities offered on-campus.

I took the above picture earlier this year; you can click on it for a higher resolution version.

Software installed to support the setup:

My Apple iPad is running the DisplayLink App to serve as an additional monitor using its 1024×768 screen.  Because the DisplayLink software only works over Wi-Fi, I have to create a Wi-Fi access point using Connectify so that  the iPad can join on the same network; connecting the iPad to the school wireless network won’t work due to security configuration.  The built-in USB power port on the Kensington power adapter is used to keep the iPad fully charged.

iTunes, Digsby IM and SOTI Pocket Controller-Pro can be relegated to the secondary display to free up the laptop’s 13.1-inch screen.  I really like Pocket Controller-Pro as it allows me to reply to BlackBerry PIN and WhatsApp messages using a full-sized keyboard.  Finally, the Logitech Anywhere MX is in my opinion the best wireless mouse around.  And I’ve tried quite a few of them in my time, including the Microsoft Wireless Mobile Mouse 4000, the Microsoft Arc Touch Mouse and even the Razer Lachesis gaming mouse – though the last is a corded mouse.  And yes, I think Logitech’s Darkfield laser tracks better than Microsoft’s BlueTrack.

Everything you see in the above picture (sans the bottle of distilled water) is packed into my (14-inch) Case Logic laptop bag.  And no, I’ve never weighted the bag before…