My brief hands-on with the BlackBerry PlayBook 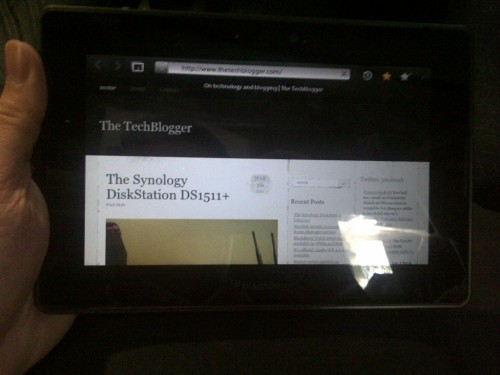 I was invited by RIM Singapore to give the new BlackBerry PlayBook a spin yesterday evening.  There were about three PlayBooks (final revision of the hardware) that were passed around, and I was able to spend about 10 minutes of hands-on-time with one.  Despite the fair bit of criticism it received this week, I happen to think that it would make a great tablet device.

Without regurgitating its technical specifications, here’s why I think RIM has gem on its hands:

Consider this, to access the home screen with row of running Apps on top, users simply have to swipe upwards (off-the-screen).  Doing the same from left-to-right (again off-the-screen) will let you switch to other Apps – I think RIM got it spot-on in terms of gearing the UI towards meaningful multitasking. To put it bluntly, this aspect of the PlayBook makes the iPad’s double-clicking of the home button look downright clunky and obsolete in comparison.

Now, I do admit that the PlayBook might have limited utility as a stand-alone tablet for non-BlackBerry users.  BlackBerry users, however, will find themselves with a tablet that dovetails perfectly with their smartphones in a very seamless manner.  Unfortunately, I wasn’t able to catch BlackBerry Bridge in action – there were no demo smartphone with the BlackBerry Bridge App installed.  Next time perhaps.

Anyway, I also penned my thoughts on why I think the PlayBook will succeed on FierceCIO:TechWatch.  Do check out Why the BlackBerry PlayBook will be a strong tablet contender.