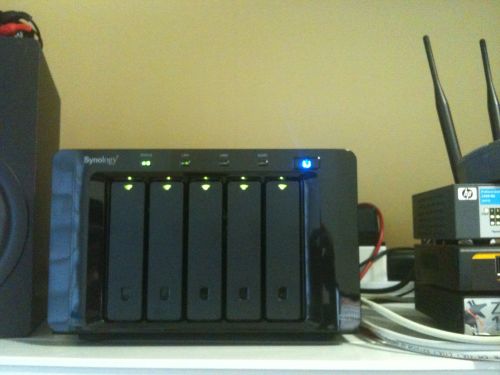 The Synology DiskStation DS1511+ arrived late last week, and I found a couple of hours over the weekend to set it up and perform some initial tests.  In a nutshell, the DS1511+ is the highest-end Synology NAS (Network Attached Storage) that is not in a rack-mountable format.  This makes it especially compelling for SMBs or branch offices without the benefit of a server closet or server room.  Though having five hot-swappable drive bay means that the DS1511++ is necessarily armed with dual 80mm fans, the noise they emit however is barely perceptible from my desk just two meters away.

Do not be fooled by its diminutive appearance however, my limited tests show that it is every bit the high-performance storage solution it is being billed as. Even without using link aggregation (It has 2x Gigabit Ethernet ports), I was able to copy files to it at sustained 70+MBps rates using Windows file sharing from my SSD-equipped laptop when set up with in Synology Hybrid RAID (SHR) mode.  The presence of two eSATA ports (3 Gbit/s) also allows the system to be upgraded to a total of 15 drives by linking them with two Synology DX510.  Finally, the DS1511+ comes with iSCSI Support for virtualization solutions; it is VMware, Hyper-V and Citrix ready.

Am looking forward to testing and reviewing it further soon!