The smartphones in my house 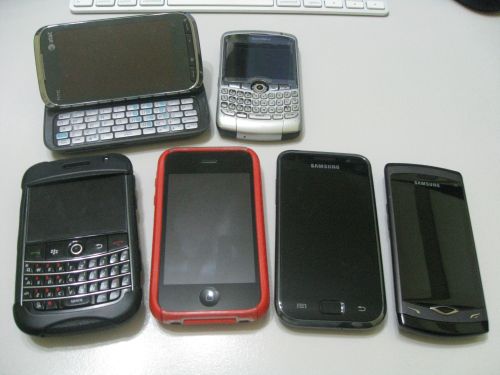 Singapore has a rather high mobile phone penetration rate of 137.4% as of Dec 2009.  Of course, this is nothing compared to places such as the UAE, which stands at 193.5 percent, followed by Saudi Arabia with a rate of 165.5 percent.  Well, I was reminded of the statistics again a couple of weeks ago, and so I decided on impulse to do a count of the number of smartphones lying around in my house and realized… that I beat the national average by a wide margin.

Absent with apologies: My wife’s BlackBerry Bold 9000 and Nokia E65, as well as an iMate Ultimate which I gave away last month.

Final tally of the mobile phone penetration in my house at the time the photo was taken: 400%.

Interesting Note: With the exception on the BlackBerry Bold and BlackBerry Curve, all the phones in the photo runs on different operating systems (BlackBerry OS, Android, Apple iOS, Samsung’s Bada, Microsoft’s Windows Mobile)